A special early peek at what Lori King has been working on!

Sunnyside Up releases on January 26, but you can download the first book in the Crawley Creek Series, Beginnings right now for FREE on all e-retailers.

One problem after another forced Lacy and Drannon into a humorous wedding in Las Vegas. While they were saying “I Do”, their ranch in North Dakota was inundated by flood waters. Now that they are back home at Crawley Creek, Drannon wants to give Lacy the reception she dreamed of. However, good intentions never go unpunished as their happy day is beset by issues. All the residents of Crawley Creek are praying things turn sunny side up in time for the wedding of the decade.

The sensation that she was being watched prickled over her skin and she lifted her eyes to find her husband staring at her hungrily from the doorway. “Hey baby, what’s the serious look for?” He asked gruffly, making her belly quiver just by licking his lips.

“Uh, nothing too important. Did you finish up everything you needed to?” Her voice came out breathy and husky with the desire rolling through her veins.

He nodded, and moved further into the room, pushing the door shut behind him. “Lolly looks good, and the hands have everything under control for the next couple of days.”

“That’s good. When should we expect Lolly’s new baby?” she asked, rising from her chair in anticipation. She couldn’t care less about the pregnant mare right now, but this was part of the game of seduction between them. She enjoyed the pursuit. The feeling of his need for her when he pushed her into an intimate situation in an inappropriate place.

She loved the way he took the kiss from her, not asking, not teasing, just taking what he needed and giving her back what she wanted. It set off explosions in her brain and her core heated quickly. Rubbing against him like a cat, she tugged at his shirt, pulling it free from his belt, and pushing her hands underneath to reach his bare chest. Years of hard ranch work had etched muscles like granite into his body, and she paid homage to each one with a caress or squeeze. At the same time he ran his own hands from her scalp to her ass, stealing squeezes and strokes of his own.

Parting with a gasp for air, she moaned when he nipped her earlobe. “We have to leave in an hour,” she murmured.

“I only need half that,” he growled against her ear, spinning her and pinning her to the top of the desk, her laptop closing with a sharp click. 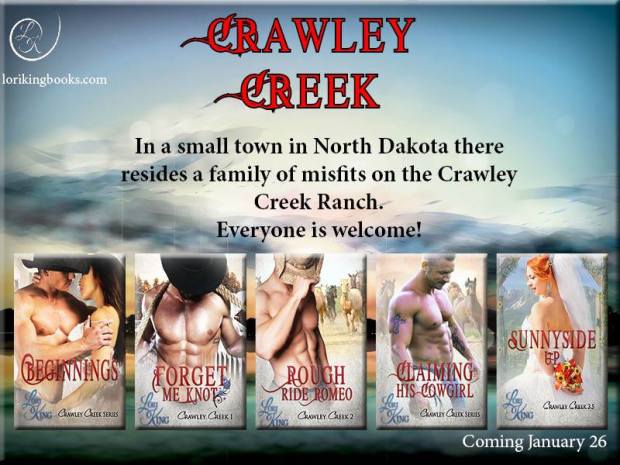 Best-selling author, Lori King, is also a full-time wife and mother of three boys. Although she rarely has time to just enjoy feminine pursuits; at heart she is a hopeless romantic.

She spends her days dreaming up Alpha men, and her nights telling their stories. An admitted TV and book junkie, she can be found relaxing with a steamy story, or binging in an entire season of some show online. She gives her parents all the credit for her unique sense of humor and acceptance of all forms of love. There are no two loves alike, but you can love more than one with your whole heart.

With the motto: Live, Laugh, and Love like today is your only chance, she will continue to write as long as you continue to read. Thank you for taking the time to indulge in a good Happily Ever After with her.

← THE MOUNTAINS, A BLIZARD, AND A SKI RESORT FOR EXQUISITE CHRISTMAS
My Sexy Saturday ~ Our Sexy New Year →