This week’s #TeaserTuesday is from romance
novelist, Lindsey Gray. Nerdy Girl Nation is the first book in Gray’s new Nerdy
Girl Novel series. This novel takes us behind the scenes of reality television
and professional wrestling, what it is like to live behind a mask while being
in front of the camera, and how to fall in love with the one-that-almost-was. 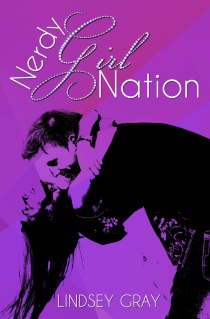 Who knew the girl who spent most of her Saturday nights watching Doctor Who marathons with her best
friend would end up becoming a reality television star? Not Emma MacLean.

Emma tried to leave the nerdy girl behind as the Vice President of Operations for
billionaire venture capitalist, Terrance Hunt, on the hit show Hunt for Life. When double tragedies
occur on the same day, Emma is out of a job, but the cameras and a nation of
fans continue to follow her.
Rob “Bobby” Breyer lived and breathed the professional wrestling circuit for five
years. Rob happens to be a devoted Hunt
for Life fan due to a chance meeting with Emma while in high school. When
he reaches out to Emma in her time of crisis, he never imagines how much it
will change his life.
After twelve years, their attraction still sizzles and this time, Rob’s not letting
Emma get away. As the cameras roll, Emma’s new career and Rob’s quest for glory
are in the spotlight. When the heat is on, they’ll need all the support they
can get from the Nerdy Girl Nation.

Add to Goodreads.
Pre-order for release on October 8th, 2015

Exclusive Excerpt
In this excerpt, you get a glimpse of Emma and Rob coming face to face for the first time in twelve years. Emma is at the training facility for the wrestling company Rob works for when he spies Emma with her brother, Harry, from across the room
*****
“Perfect!” Cherry instructed. “You’re a
natural.” Cherry turned her head to Aaron. “You think we can convince her to
fight in a real match?”
Emma laughed as she got off Peaches and
helped her up.
“Never say never, Emma.” Harry cocked his
eyebrow at her.
Sometimes she hated how well her brother
got her. He would pick this moment to remember her childhood daydream of
becoming a women’s champion. Harry would use this as an opportunity to share it
with the world if she didn’t shut him down.
“Enough of your mouth.” Her
eyes drifted from her brother to the crowd of people who gathered around the
ring.
Emma’s heart leapt into her throat. Rob
Breyer stared right at her with a brilliant smirk on his face. Sweat drenched
hair, crystal blue eyes, killer smile, and a body currently making her lady
parts ache rattled her entire being.
“Good to see you again, Emma.” Rob offered
his hand to help her out of the ring.
“You too, Rob.” She immediately
backtracked. “I mean, Bobby.”
“Rob is fine.” She realized she held his
hand a bit longer than she needed to and reluctantly pulled away. “It’s been a
while.”
“Twelve years.” Emma lost herself in his
eyes, but the real world intruded when Aaron spoke up.
“That’s right, you two know each other,”
Aaron mentioned with a sideways glance at Rob.
“Emma was part of one of the most important
days of my life.” Rob’s smile intimated something sinful. She needed to set
things straight.
“What he means is I was there the day he
won the national wrestling championship against my boyfriend.”
Rob turned to Aaron and continued the
story. “I met her and her boyfriend, Derek, during the tournament. Derek and I
were both shocked when we advanced to the final match against each other.”
“Rob won the match after Derek put him
through the ringer.” Emma laughed at the memory of the two teenagers rolling
around on the mat.
“Yes, but Derek got the girl.” Rob’s smile
was genuine and caused a flush to creep up Emma’s neck to her cheeks.
“Didn’t last much longer,” Harry quipped.
“Not after—”
Emma smacked Harry on the shoulder. “I
don’t think this is the time or place to get into my lackluster love life.”
“Oh, I don’t know. I might be interested in
hearing what an idiot my old pal Derek is.” Rob walked over next to Harry like
they were old friends.
Emma grabbed Harry’s arm, pulled it around
his back and forced it upward. “Don’t you dare.”
“I give! I give!” Emma let go as the crowd
around them laughed. “I taught you well, young Padawan.”
About the Author

Lindsey Gray typed her first complete novel at the age of twelve and dreamed
of making her writing into a career. When her eighth grade class wrote a twenty
year reunion story, casting her as a mystery novelist, she wasn’t sure she
could make it a reality. After years of writing off and on, she decided to make
a go of it. In December of 2010 she finally made her dream come true with her
first published novel, Lies Inside. Five years and thousands of written
words later, Lindsey is releasing her seventh published work, Nerdy Girl
Nation.
When Lindsey takes a break from writing, she spends time with her
husband of thirteen years and their two children, reading all kinds of romance
novels, and hosting her own weekly radio show, Gray Matters, on TMV Cafe
Internet Radio.