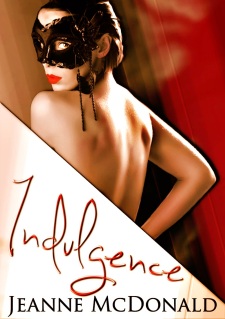 Indulgence
by: Jeanne McDonald
Genre: Erotica/Erotic Romance
Release date: TBD
One night of indulging in her carnal nature will unlock a world of mystery and desire she never dreamed existed.

A year has passed since Addison George was left at the altar after her husband-to-be announced he was gay. Still friends despite what happened, she secretly harbors hope that all of this was a phase and he will come crawling back to her. That dream is shattered when he announces that he’s engaged to the man he left her for.
Spiraling out of control, Addison agrees to accompany her best friend to the sex party of the year. Hosted by world-renowned erotic romance author, Sebastian Hawk, exposed anonymity is the name of the game. The rules are simple: all guests are required to remain nude for the duration of the event, except for a mask to hide one’s identity, and everyone must partake in at least one salacious delight.
Out of her sexual league, Addison spends the evening with a certain clothed employee who explains to her the world in which the enigmatic author lives. While she wishes to understand more about the strange novelist, Addison can’t help but feel drawn to the handsome and mysterious employee who has introduced her to the sensual realm of Indulgence.
Lost in a world of secrets and passion, Addison will unmask the man behind the mystery while exploring her carnal nature. Through it all, she’ll discover that not everything is as it seems, and to never judge a book solely by its cover.

Jeanne McDonald began telling stories at the ripe young age of five, when her mother considered the truth to be a lie due to her extensive embellishment to the retelling of an event. She wrote her first short story when she was twelve years old, and at the age of sixteen she tried her hand at poetry. She reconnected with her love for writing in 2010 thanks to the encouragement of a dear friend.

Her passions include a “mild” Starbucks addiction, music, reading, quotes, movies, and romance. When she’s not spending time with her family, she can be found reading, writing, chatting with her friends or diligently working toward her bachelor’s degree in Literature. A proud Texan, Jeanne currently resides in the Dallas/Fort Worth area with her family.

Want to join Jeanne’s street team? New members are being accepted at this time.